Vylomeniny is the Czech version of Zodiak Rights’ format Deal With It! where ordinary people, meeting a friend or relative for lunch, are asked right there and then to participate in a game with a chance to win a cash prize. All the contestant has to do is … exactly what they’re told – weird, funny, or crazy as it may be – without losing his or her cool, quitting and, most importantly, without being found out by his or her companion. The entire time, the contestant and partner are being filmed by hidden cameras. 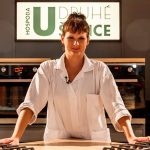